In central Greece and at the foot of the imposing rocks of Meteora, near Pineios river, is located the city of Kalampaka, a town with a population of only 12.000 citizens but with a great history. 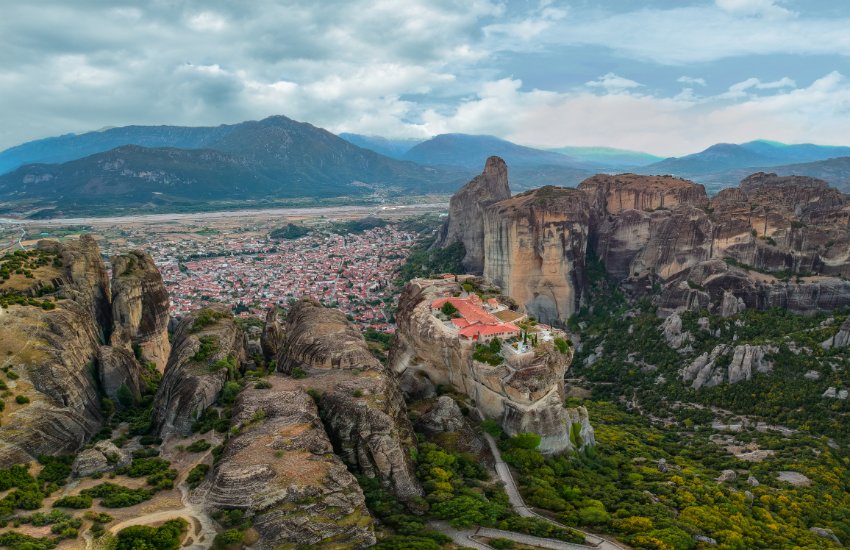 In the Paleogene Period Meteora were small islands of a shallow lagoon, which covered the whole plain of Thessaly. According to mythology goddess Demeter and Persephone transformed the vast lake of Thessaly into a vast plain. Homer and Strabo refer to the ancient city Ithomi the “klomakoessa” (= with stones and rocks), while in 343 B.C. King Philip of Macedon gave to the city the name Aiginio. In 146 B.C. the city was conquered by the Romans and in 48 B.C. Julious Ceasar came to the town.

During the Byzantine period when the monasticism was flourishing and the first monasteries were built, the city takes the name Stagi (=honoured to the Saints). In the days of the dominion of the Ottoman Empire in the 15th century, eventually the city takes its current name Kalampaka, meaning powerful nice fortress.

Indeed! As the visitor walks through the streets of the town, he feels citizen of a powerful fortress, of a natural geomorphological fortress of global uniqueness and beauty. At the same time he feels citizen of the world, as the modern town of Kalampaka has the most tourists than any other non – coastal city in Greece. It is a destination for thousands of visitors who desire to see the monuments of the area and the wonderful mountains of Pindos and Chasia, the Aspropotamos (white river) or Achelous river and mostly the region of Meteora. Every year more than 2.000.000 tourists visit Kalampaka.

Kalampaka is a really beautiful town with remarkable stores and hospitable people and its delightful scenery is definitely breathtaking. The multiple activities that are a reference point for the city, they offer great thrills and surprise even the most demanding visitor!

What to Do
Dedicate some of your time to visit the famous museums of the town.
Wander around the small local shops with the handmade wood carved souvenirs, leather sandals and traditional products.
Don’t miss to taste the authentic recipes of the local people, which prepare from excellent local products, such as traditional pies, homemade sausages, feta cheese, tsipouro and wine from organic vineyards.
You can also take honey from mountain spruces, spoon sweets and rare herbs.

Must Try
You should walk through the picturesque small roads of the old city with the traditional architecture and visit the Byzantine church of the Assumption of Virgin Mary, which was built in the 10th century. Inside the church one can admire the magnificent wall-paintings of the 16th century as well as the unique in Greece, marble carved pulpit with the two entrances. Located in one of the tallest places of the city and it has wonderful background of Meteora rocks and panoramic view of Kalampaka.